Posted on October 29, 2013 by The Editors of Garden Variety

Going Green: The James Scott Mansion, one of the city’s many crumbling historic structures, covered in ivy. Photo by Shannon Roxborough for Garden Variety.

Garden Variety’s Founding Editor Shannon Roxborough, a Detroit native who lived there for 35 years, reports on the troubled Motor City’s efforts to chart a greener future.

When the 19th century railroad bubble burst and an economic depression called the Panic of 1893 arrived, Detroit potato baron-turned-mayor Hazen Pingree pioneered using city lots to grow food for residents, a model that caught on in New York, Chicago, Boston and other cities across the nation.

But that was before automobiles became the dominant local industry, and long before Motown became a poster child for violent crime, urban blight, a dwindling population, economic woes and political dysfunction—punctuated by the recent sentencing of former mayor Kwame M. Kilpatrick to 28 years in federal prison for corruption.

What’s less known is the now-bankrupt city is turning over a new leaf by returning to an agrarian mindset, fueling hope that the once-booming town can reverse its downward spiral. 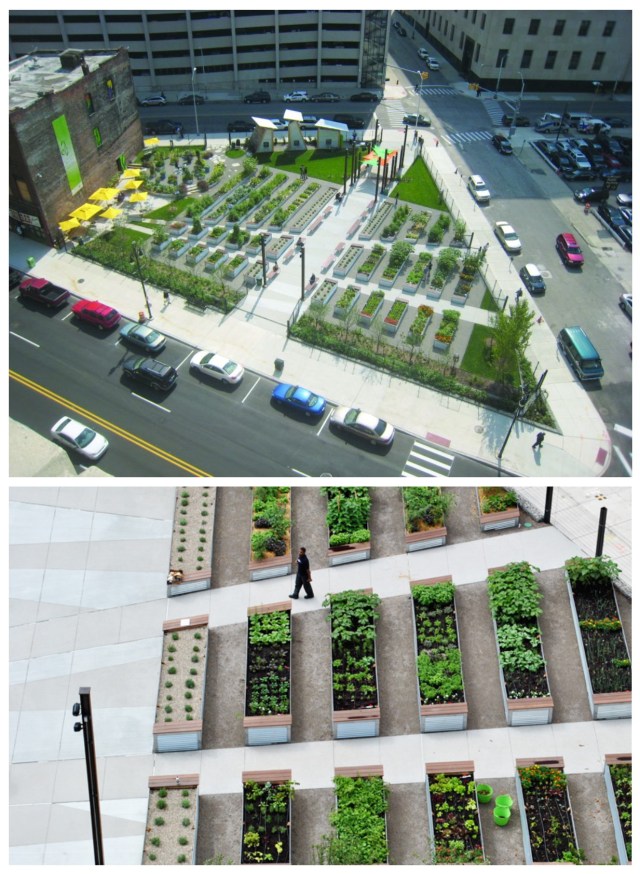 The Eastern Market, the largest historic public market district in the U.S., buzzes with energy not seen since produce, meat and spice merchants first fanned out over its three square miles more than 100 years ago. Ambitious entrepreneurial ventures like Hantz Farms aim to turn some of the thousands of acres of abandoned inner-city land into profitable urban farms. Michigan State University has plans to build a $100 million, 100-acre urban-agriculture center that will put Detroit at the forefront of global research on city-based farming—focused on vertical growing in multi-story buildings, innovative energy production and water conservation. And with hands-on support from individual and groups like The Michigan Urban Farming Initiative, a nonprofit committed to using city agriculture to combat income inequality, as many as 2,000 community gardens now dot its nearly one-third empty 139 square miles, positioning Detroit as an unlikely leader of the urban garden movement.

In an e-mail interview, Trish Hubbell, marketing director of The Greening of Detroit, a nonprofit working to improve Detroit’s ecosystem through tree planting, reuse of city land for farming and environmental education, says: “The city of Detroit’s population is about 40 percent less than it was 50 years ago, and now has 20 miles of vacant land. Our organization is committed to repurposing land in ways that benefit Detroit neighborhoods. We do this with by planting trees, developing green infrastructure, and supporting the urban agriculture movement in the city. We are excited about transforming Detroit into a greener, healthier urban center.”

Aside from planting trees to replace the many ravaged by Dutch elm disease and emerald ash borer beetle to restore the city’s largely barren canopy, her group is actively involved in the city’s farming movement. “Urban agriculture is great way to use the vacant land in a way that benefits Detroiters. It also promotes healthy eating and self-sufficiency,” she said. “The Greening hosts an adult and youth apprenticeship program at its large urban farm. This 2.5-acre farm garden is a small-scale production facility is also used as a training facility for people interested in urban farming.”

Deborah Silver, a longtime metro-area landscape and garden designer who has completed a number of Detroit projects, says commercial properties have also played a major role in the city’s green evolution: “Local business leaders have long been passionate about creating a city atmosphere which is not only friendly, but good for residents. I have been involved in several downtown landscape and garden projects for Bedrock Real Estate Services and am impressed by their level of commitment and involvement in our city.  Their garden spaces are always full of people.”

“I see much effort being put to the idea that green spaces are healthy places for people to live and work and that locally grown food helps make for a healthy life. An appreciation for nature and a respect for the landscape, both ornamental and agricultural, is an important step in the reclamation of our urbanized spaces,” she added. “The interest in green spaces in Detroit’s urban areas has been a topic of intense discussion and action by people who believe in Detroit and its possibility of changing for the better.”

But finding alternative uses for now-empty land and increasing the city’s green space are only a small part of the total picture. Eventually, Detroit will need to address the serious social, economic and political issues that have plagued it for decades and the city’s citizens must do their part to help. Not everyone is convinced that will happen.

“Yes, the are good things going on, including gardens and farming, and some suburbanites have moved into to the city core (downtown and midtown), but the overwhelming majority of Detroit is in shambles and being completely neglected, so most people those areas don’t see the benefits of growing anything because they live in a very harsh reality,” said one lifetime resident, who asked to be identified only as a retired office manager. “Another problem is many locals are more sensitive to negative media coverage than they are concerned about the reasons for it. They expect the media to report on the good and ignore the bad, but sit on their duffs and do little to change Detroit in people’s eyes. Instead of complaining that the city gets a bad rap and doing nothing, the people involved with green projects are actually working on the front lines to make the Detroit a nicer place. I just don’t think most people in the city have enough will to join them and make a difference.”

It doesn’t help that the staunchest opponents, both residents and city officials, see large-scale urban farming efforts as a land grab, with some going so far as to call it as a form of “modern-day slavery.” They say proposals are a guise to buy land cheap and later develop it. Others argue that even with an abundance of unused lots, vacant, city-owned land is too valuable to sell for a pittance to use for agriculture instead of rebuilding residential or commercial property, which would contribute more to city income and restore lively urban streetscapes.

The diverging sentiments reflect the realities in this place of contrasts—at once filled with hope and mired in hopelessness; well acquainted with exhilarating highs and depressing lows—marked by stark racial and class divisions, frequent political squabbles and often competing visions of the future of the city.

Gary Williams, a public school teacher who has witnessed four decades of ups and downs in Detroit along with more than a few false promises of rebirth, is cautiously optimistic.

“Community gardens, urban agriculture and greener public spaces have great potential to contribute to a better future,” he said. “But for that to happen, it’s going to take a fundamental change in the way people view things here. We have to find a way to move beyond the old way of thinking. If city leaders are progressive, they will use these efforts as a springboard to make Detroit a green hub with tax breaks and other incentives that will ultimately create green jobs by attracting small garden businesses, environmental-related corporations and farming research projects by institutions of higher learning.”

Trish Hubbell is more upbeat about the city’s potential. “The city of Detroit is in a unique position, and we believe opportunities lie ahead to transform it into a more walkable, sustainable world-class model for other post-industrial cities around the world,” she said. “We are excited about the Detroit Future City strategic framework laid out last January by the Detroit Works Project Long Term steering Committee assembled by Mayor Dave Bing. The Greening of Detroit is involved in the implementation of this visionary strategic plan and will continue to work with community partners across the city to make Detroit a healthier, safer and greener place to live, work and play.”

But the town they are working to improve has a lot of catching up to do. And only time will tell if Detroiters will learn to strike a balance, allowing the seed that has been planted to blossom into a prosperous, livable city rooted in activism, environmentalism and a strong sense of community or if it will stifle its growth, adding yet another chapter of unfulfilled dreams to its long history of making comebacks.

“I don’t think anyone is under the illusion that gardening, farming, tree planting and other green initiatives alone will be the answer to Detroit’s problems,” notes Williams. “But you can’t deny that they are great ways to effect positive change while doing something good for the city and local environment.”

To learn more about Detroit’s green renaissance or to get involved with a trowel, shovel or checkbook in hand, visit The Greening of Detroit at greeningofdetroit.com.

Shannon Roxborough, the founding editor-in-chief of Garden Variety, has been a freelance journalist and writer for 24 years—acting as a magazine correspondent, newspaper columnist, book ghostwriter and online and print editor along the way. His writings and research have appeared in numerous leading regional, national and international publications and Web sites, including, The New York Times, Newsweek, Money, GQ, Southern Accents and The Christian Science Monitor. He grew up in Detroit fascinated by his mother’s backyard kitchen garden and now helps his wife, Angela, an avid gardener and soon-to-be small specialty grower, tend to their edible and ornamental plantings in Zone 6b. He loves trees, shrubs, flowers and fresh vegetables and herbs, but hates weeds with a passion.

8 Responses to In Detroit, Growtown Blooms